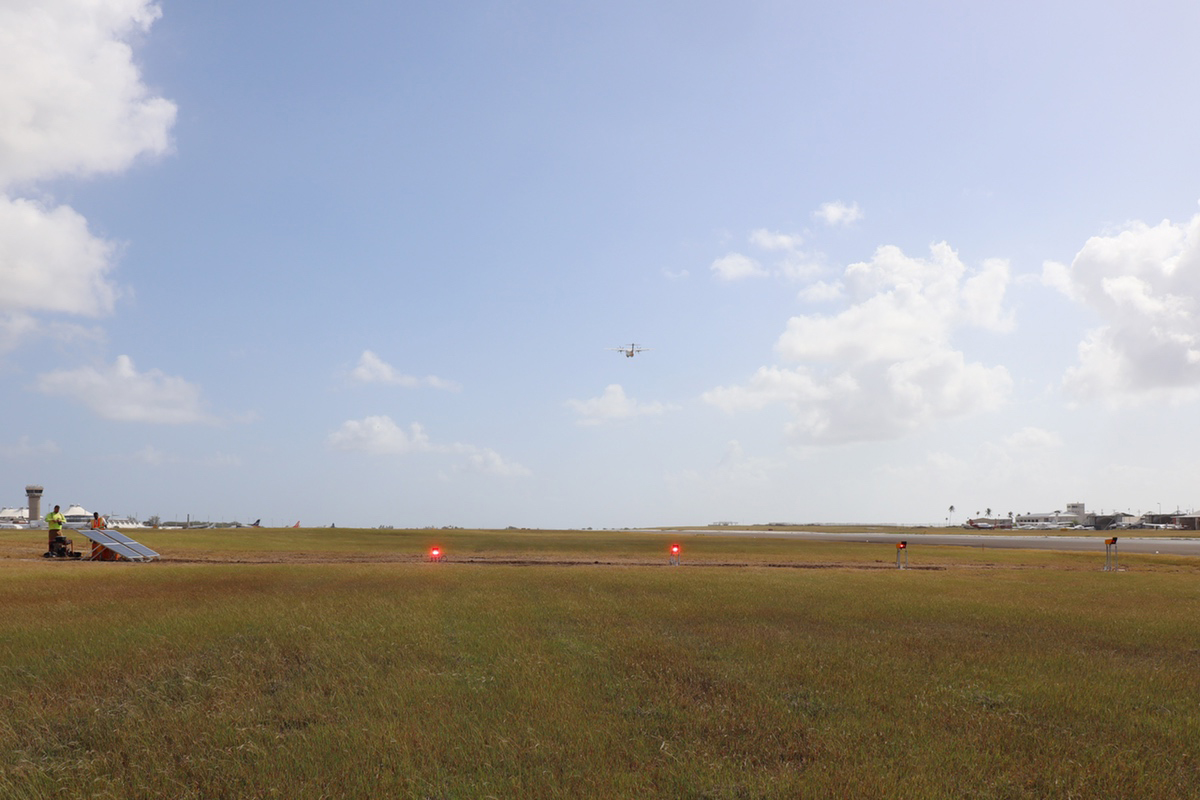 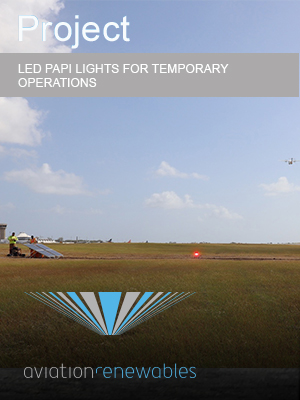 LED PAPI lights. Aviation Renewables supplied, installed and commissioned a Solar LED Precision Approach Path Indicator (PAPI) for temporary use during construction activity. A runway-repaving project necessitated several threshold displacements over the course of several months. The Solar LED PAPI proved the ideal choice for cost-savings, ease of use and the ability to quickly move it as the project progressed.

The International Airport in the Caribbean is conducting a large runway repaving project to improve the airport for several more decades. The airport has a single runway, and is the only airport in the country. It is the primary gateway to the country and a major hub airport for the entire Eastern Caribbean. As a result, the paving project needed to be carefully coordinated to allow the airport to maintain operations.

The plan entailed displacing the thresholds several times throughout the project. Each time the threshold is displaced, a PAPI would need to be installed in order to provide accurate glideslope guidance for the new touchdown location.The Engineering Team consulted Aviation Renewables for advice on the best solution to this issue. The engineering team was reluctant to trench and lay conduit to each PAPI site, as this would be a significant cost in both time and money.

Aviation Renewables was able to supply an ICAO-compliant LED PAPI powered by a 1500-watt solar power system, this efficient unit enables the airport to operate the PAPI 24/7. The Solar LED PAPI system is an ICAO compliant 4-box PAPI system. It is powered by a 520-watt solar power system which will enable 24/7 operations in case of emergency evacuations for extended periods of time. The 30,000cd Solar LED PAPI system was visually checked to be visible from 10 miles on approach to the airport. The system has a photocell that provides automatic dimming at night.

Aviation Renewables was able to supply the PAPI within 3 weeks of order and attended the installation and commissioning of the first location. The Engineering Team was trained on installation, commissioning and operation, with the intention that they will be able to easily move it to the next location when the project progresses.

The Solar LED PAPI (Precision Approach Path Indicator) for Temporary Operations has no electrical inputs and it can quickly be moved in a matter of hours, with very little impact on the operation. In addition, the cost savings further compound considering the relatively high electricity price witin the island nation. The LED PAPI has been operating safely and effectively, and adds a measure of simplicity for planner of the large infrastructure project.