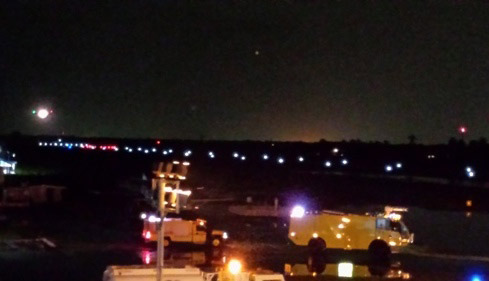 Posted at 20:55h in News by aviation.renewables 0 Comments
0 Likes

Director General (ag), GCAA, Chaitrani Heeralall, accompanied by senior GCAA staff and the Director General of the Eastern Caribbean Civil Aviation Authority (ECCAA), Donald Mc Phail, visiting from Antigua for the occasion, were all there to observe the landing and mark the occasion.

The LIAT flight originally scheduled to arrive at 19:40 hrs was forced to postpone its departure from Port of Spain because of the huge storm which engulfed the capital city and bucketed rain on the Airport and its approach just after sunset last night. Passengers booked on the historical flight were forced to drive through blinding rain seriously affecting visibility and a flooded East Coast highway approach to the Airport in order to make their flight.

The skies over the Airport began to clear at about 21:00 hrs and at 21:45 hrs when the lights of the LIAT aircraft appeared over the North West approach to the Airport, visibility was near perfect for the landing.

Thirty nine passengers boarded the inaugural flight for Barbados after a quick turnaround of the aircraft for a 22:37 hrs departure rescheduled to arrive at approximately 00:40 hrs.