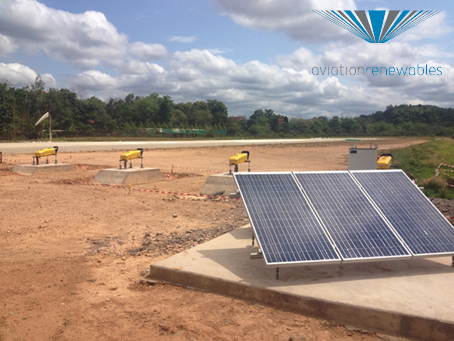 Posted at 21:05h in News by aviation.renewables 0 Comments
0 Likes

Working with Aviation Renewables, the Solar Series 4-box LED PAPI, powered by the MAPPS solar power system was deemed the best choice for reliability, battery autonomy, and historical performance. The radio controlled PAPI systems allow remote control of both PAPI systems from the terminal building, and enable the airport staff to quickly activate the PAPI system when contacted by an inbound aircraft. The LED PAPI is virtually maintenance free: with a simple battery replacement the only scheduled maintenance after 5-7 years. Aviation Renewables traveled to the site to offer installation, training and commissioning support. Both PAPI systems were installed within 4 days of arriving on site, with zero impact on airport operations. A team of airport personnel were then trained on the operation of they system over the course of one day

Aviation Renewables works with and represents manufacturers that produce green-tech and energy savings solutions for the aviation industry while acting as a centre of excellence for airports, industry stakeholders, customers and a global distribution network. Aviation Renewables combines unique technologies from leading manufacturers to create customized solutions for the benefit of the industry, environment and its global customers.